The Brickman Wonders of the World

The Brickman brings his ‘Wonders of the World’ to Perth!

LEGO has to be one of those universal toys that every kid enjoys and never gets bored of. LEGO sparks creativity, they have blocks and themes for all ages and worldwide everyone is familiar with the familiar LEGO brick!

The Brickman (Ryan McNaught) has come to Perth before and we’re lucky that this time he is back with his ‘Wonders of the World’ exhibition, on display at the Perth Convention and Exhibition Centre daily from 9.30am until 30 July 2017.

If you and your family are into LEGO, you could easily spend a good couple of hours checking out these +50 world-famous landmarks, each masterpiece made entirely out of LEGO bricks.

These never-seen-before LEGO models made their debut in Brisbane last year, marking the beginning of an Australian tour. You’ll see Big Ben, the Empire State Building, the Great Wall of China, Egyptian Pyramids, the Arc De Triomphe and our very own Great Barrier Reef to name but a few.

I felt like I was reliving my Europeans travels from my younger years….I loved checking out the models from all angles, to see what was happening inside, what were all those LEGO people doing and just to examine all the tiny details that had been captured!

We were lucky enough to have a chat with Ryan, aka The Brickman and I asked him what he favourite model was – he had to think about it, but said it was definitely the Leaning Tower of Pisa! Apparently it was quite challenging to create a round tower but he’s really happy with how it turned out. Unfortunately Ryan won’t be around every day, but if you want to meet the man himself, we hear he’ll be back wandering around the exhibition on 4 July.

It’s an interactive exhibition which basically means there’s lots of LEGO for the kids to play with along the way. So many LEGO blocks and boards!!! My youngest was particularly impressed with the Duplo building set up around the Golden Gate Bridge. There was a zone where you could make LEGO cars and race them down a steep incline. And at the end of the exhibition (I’ll warn you – it’s right before the LEGO shop) there’s a building station with small LEGO boards to build on and display on the wall.

Most displays are set up surrounded by LEGO pieces and I think the idea is to try and replicate the designs or use your imagination to make mini versions of these landmarks from around the globe.

If your kids are a bit older, they might like to learn a bit about the history of these landmarks and at each model you can read more information about the real place/item/vehicle. And of course there’s lots of LEGO info too – number of blocks, build time etc.

Tickets start at $20 from Ticketek. You can buy tickets at the door but they encourage you to book ahead to ensure you get your preferred session time.

Ryan McNaught is the only LEGO® Certified Professional in the Southern Hemisphere and one of only 14 in the world! Ryan and his team spent 4,944 hours to build ‘Wonders of the World’, take a moment to digest how much time that actually is….

Incredible! In my opinion, well worth it!

Alison Cridge is a busy marketer who loves exploring Perth with her family, more often than not in search of the perfect flat white! A born 'n bred Perth girl, Alison is enjoying seeing a different side of the city with her two young children. She loves cheese, wine and travelling and can't wait to show Izzy and Leo the world 🙂 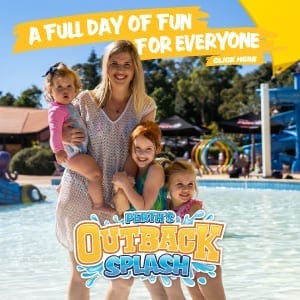